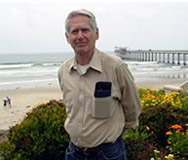 Charles David Keeling was affiliated with Scripps Institution of Oceanography, University of California, San Diego, from 1956 until his death in 2005. His major areas of interest included the geochemistry of carbon and oxygen and other aspects of atmospheric chemistry, with an emphasis on the carbon cycle in nature and the abundance and air sea exchange of carbon dioxide. In 1968, he was appointed professor of oceanography.

Born in Scranton, Pennsylvania, on April 20,1928, Keeling received a B.A. degree in general liberal arts from the University of Illinois in 1948 and a Ph.D. in chemistry from Northwestern University in 1954. Keeling was a postdoctoral fellow in geochemistry at the California Institute of Technology from 1953-56. During his postdoctoral studies with Harrison Brown at Cal Tech, Keeling developed an accurate system for measuring the carbon dioxide concentration in the air which he exploited, along with a mass spectrometer made available in the laboratory of Sam Epstein, to analyze air samples collected in forests and other rural settings. These studies led to the discovery that the CO2 concentration and isotopic composition in forest air undergo a regular daily cycle that reflects the influences of photosynthesis, respiration, and atmospheric mixing. These studies also produced a means of detecting the isotopic composition of the respired air, using a now-classical graphical approach called a "Keeling Plot" (not to be confused with "Keeling Curve", discussed below).

Keeling's approach to characterizing respired air lay largely untouched for many years, but recently has gained in importance as a standard tool in the field of ecosystem physiology. Finally, Keeling's postdoctoral studies suggested that away from the influences of vegetation and urban pollution the carbon dioxide concentration was remarkably constant from place to place and over time. This result contradicted earlier less-accurate studies which showed much greater variability. Keeling's discovery of the "atmospheric background", was of great importance, for it motivated his subsequent climatological studies of atmospheric carbon dioxide of the earth as a whole. By way of example, the discovery of an atmospheric background also eventually motivated global studies by other scientists of additional greenhouse gases such as methane and nitrous oxide and of ozone destroying gases such as chlorofluorocarbons.

The work for which Keeling is rightfully most famous then ensued. In 1958 with the support of Harry Wexler of the U.S. Weather Service and Roger Revelle of Scripps, Keeling began an extensive survey of the atmospheric carbon dioxide concentration in background air, including air-borne and ship-board measurements, and measurements at Mauna Loa Observatory and other land stations- measurements which have continued to this day under his guidance. This work was motivated by the suggestion, originally made by Svante Arrhenius, that atmospheric carbon dioxide levels might be increasing due to the burning of fossil fuels with potential consequences for global climate. At that time, however, the suggestion was controversial, in part because it was unclear to what extent the oceans might be buffering the atmospheric CO2 increase. Within a few years of measurements, the Mauna Loa record had changed the notion of the atmospheric CO2 increase from a matter of theory to matter of fact. This was an achievement of tremendous social and political importance, and within the scientific community stimulated the involvement of climate researchers such as Suki Manabe to quantify more precisely the impact of rising CO2 on global climate. The Mauna Loa record, or "Keeling Curve", as it is sometimes called, has become a standard icon symbolizing the impact of humans on the planet.

With dogged persistance, Keeling managed to sustain his program of atmospheric carbon dioxide measurements through time, thereby producing an extensive chemical climatology of immense value. In the late 1970's, Keeling arranged, through a close collaboration with Willem Mook of Gronigen, to have the isotopic composition of CO2 measured regularly on his samples, as he recognized that knowing the isotopic composition would help distinguish the influences of land plants and the oceans on the CO2 trends. His CO2 concentration records, along with the isotopic records, have formed the basis for a series of discoveries on the impacts of climate on the global carbon cycle.

One such discovery, which was already evident within a year of the first measurements at Mauna Loa, was the existence of a regular seasonal cycle in atmospheric carbon dioxide. Keeling also showed that the cycle in CO2 concentration was accompanied by a cycle in the 13C/12C ratio, bearing the clear signature of land-plant photosynthesis and respiration he had observed earlier in forest air. This demonstrated convincingly that the cycle was mostly caused by the seasonal cycle of growth and decay of land plants. This cycle is now recorded at dozens of stations globally, and forms a valuable benchmark for testing our understanding of the response of land ecosystems to climate change. Recently, for example, Keeling and co-workers have drawn attention to the fact that the amplitude and phasing of this cycle have changed significantly over the past few decades, demonstrating that spring in the Northern Hemisphere is now arriving about one week earlier than it did back in the 1960s.

Another early discovery was that the growth rate of atmospheric CO2 varied significantly from year to year. In 1976, Bob Bacastow, working in Keeling's group, pointed out that these small interannual variations were evidently associated closely with El Nino/Southern Oscillation phenomena. With the addition of isotopic measurements and longer records, Keeling was able to show that the El Nino related fluctuations were driven largely by interannual variations in the growth and decay of vegetation on land, with a smaller counteracting component due to the oceans. These fluctuations thereby provide a second important test, along with the seasonal cycle, of climate response of land ecosystems, and are widely used today for model validation studies.

By the middle 1970's, the long-term CO2 growth rate was sufficiently accurately established to quantify the so-called "air-borne fraction" (sometimes called the "Keeling fraction"), that is, the fraction of the fossil-fuel emissions which remains in the atmosphere. Combining his measurements of the growth rate of carbon dioxide with his own meticulous (and soon officially adopted) methodology for assessing the amount of emitted from fossil-fuel burning globally, he calculated an air-borne fraction of around 55%, a number which has remained quite constant over time. This observed air-borne fraction is a critical benchmark for testing models for predicting future CO2 increases, that form, for example, the basis of standard assessments provided by the Intergovermental Panel on Climate Change.

Keelings' observations also extended throughout his career to include measurements of the carbon dioxide in seawater. Inspired by his successful demonstration of rising CO2 concentrations in the air, he visualized the possibility of documenting also the corresponding increase in the carbon dioxide content of the upper oceans, which was expected as a response to the rising levels in the air. Keeling participated in the first extensive surveys of the CO2 partial pressure of seawater in the 1960's, and perfected the determination of the total carbon content and alkalinity in seawater as needed to resolve long-term changes. Keeling's vision of observing the oceanic CO2 increase did not meet with the same level of success as his atmospheric observations, largely because the slow mixing of the oceans necessitates a observational program on a scale too large to be led by an individual scientist or laboratory. Keeling nevertheless lobbied hard for the importance of such a program, which bore fruit in the recent Joint Global Ocean Flux Study (JGOFS) and the World Ocean Circulation Experiment (WOCE) carbon surveys. Keeling's exacting seawater measurement techniques formed a benchmark for validating these more extensive programs. Keeling was also a pioneer in the creation of oceanic time series measurements, leading the longest ongoing program of the ocean carbon parameters near at a site Bermuda - measurements which subsequently inspired the more extensive JGOFS time series begun around a decade later near Hawaii and Bermuda.

In addition to making measurements throughout his career, Keeling has also participated in important advances in the modeling of the global carbon cycle. The first study of this sort involved a collaboration with Bert Bolin, which resulted in a classic paper on atmospheric mixing based on the patterns of variations in atmospheric carbon dioxide. In a series of papers in the early 1970's with coworkers, Keeling advanced the modeling of the global carbon cycle, these studies being the first to exploit the observed air-borne fraction to make assessments of land and ocean carbon uptake. In these papers he also broke important ground in modeling the vegetation response to carbon dioxide with the introduction of the so-called "beta factor", an approach still in use. In a series of papers in 1989, Keeling and coworkers showed how flows of carbon dioxide could be deduced using atmospheric observations combined with atmospheric transport models. These papers were the first to point out the importance of the north-south interhemispheric gradient in carbon dioxide as a global constraint on the regional distribution of CO2 sources and sinks, and the first to point out the existence of a natural flow of carbon-dioxide through the oceans from the Northern Hemisphere to the Southern Hemisphere. These features are at the heart of continued controversies over the magnitude of northern hemisphere carbon sinks.

While at Scripps, Keeling was a Guggenheim Fellow at the Meteorological Institute, University of Stockholm, Sweden (1961-62), and a guest professor at both the Zweites Physikalisches Institut of the University of Heidelberg, Germany (1969-70), and the Physikalisches Institut of the University of Bern, Switzerland (1979-80). He was the author of over 100 research articles and the recipient of many awards. Keeling received the 1981 Second Half Century Award of the American Meteorology Society for his fundamental and far reaching work on the measurement of atmospheric carbon dioxide. He was elected a Fellow of the American Academy of Arts and Sciences in 1986. In 1991, he received the Maurice Ewing Medal of the American Geophysical Union, and in 1993, received the Blue Planet Prize from the Science Council of Japan and the Asahi Foundation. In 1994 he was elected a member of the National Academy of Sciences. In 1997, Keeling was honored at a White House ceremony by then-Vice President Al Gore with a special achievement award "for forty years of outstanding scientific research associated with monitoring atmospheric carbon dioxide in connection with the Mauna Loa Observatory." In 2002, President George W. Bush selected Keeling to receive the National Medal of Science, the nation's highest award for lifetime achievement in scientific research. In 2005, Keeling received the Tyler Prize for Environmental Achievement, generally considered to be the world's most distinguished award in environmental science.

Dave Keeling encountered many highs and lows during his more than five decade career investigating atmospheric carbon dioxide. His autobiography Rewards and penalties of monitoring the Earth provides a candid and fascinating insight to his remarkable discovery of the natural seasonal cycles in atmospheric carbon dioxide superimposed on its increasing growth caused by the combustion of fossil fuels and land use changes.

Substantial biographical accounts have also occured in the following books: The Discovery of Global Warming by Spencer Weart, Thin Ice: Unlocking the Secrets of Climate in the World's Highest Mountains by Mark Bowen, and The Next One Hundred Years Shaping the Fate of Our Living Earth by Jonathan Weiner.